Black or Brown Boots? Which are the Most Versatile? 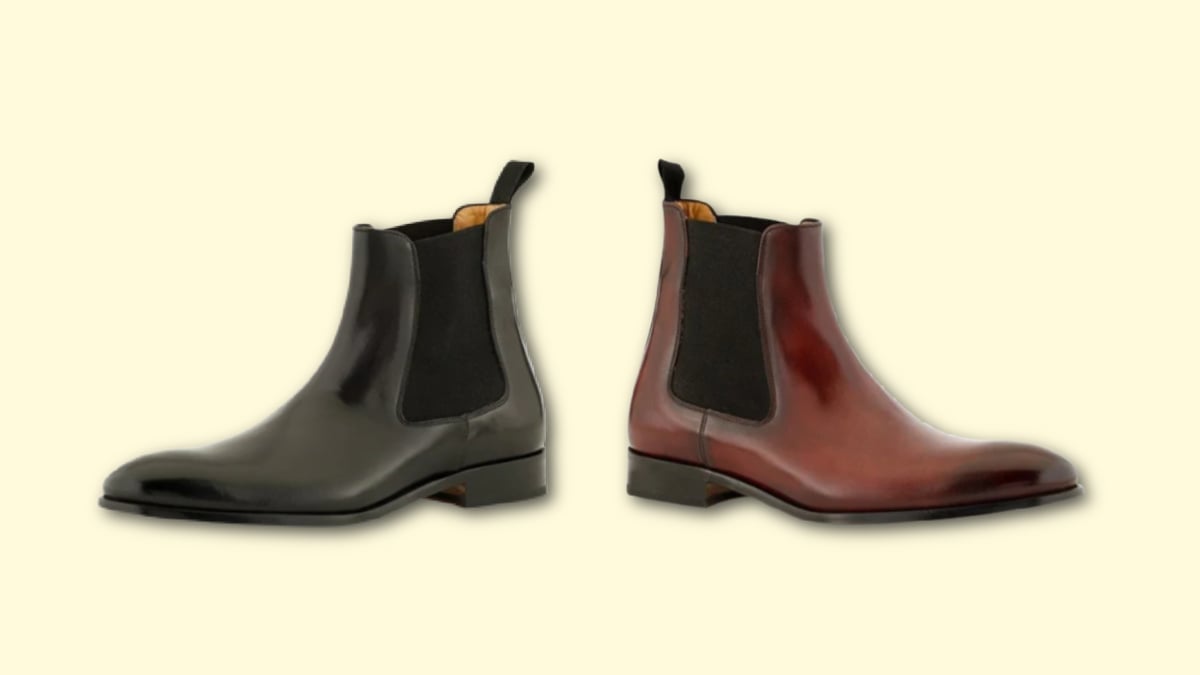 Should I get black or brown boots?

Brown boots are the most common and versatile. If you’re getting your first pair of boots, I recommend brown over black. Black boots tend to be more formal, or work the best if you have a monochromatic wardrobe filled with whites, greys, and blacks. If you wear a mix of colors, including greens, reds, and blues, brown boots are going to be a better choice.

Getting a new pair of boots isn’t as easy as it seems.

Luckily, there’s an answer. I’ll run you through a few different scenarios so by the end of this article, you’ll know whether to get brown boots or black boots.

Which is Better: Brown or Black Boots?

Brown is my favorite color for boots.

But just because they’re my favorite color doesn’t mean it’s automatically the right choice for you.

3 Reasons to Get Brown Boots

1. You wear a lot of colors

You’ll rarely catch me in a black t-shirt. It’s just not my thing. I think a girl I liked in fifth grade told me my eyes look good when I wear a green shirt, and I’ve been wearing olive green ever since.

I like the deep blue indigo of denim, rich navy shirts, military inspired olive green, and the off-white cream color of unbleached cotton. These more natural tones pair much better with brown boots. Same is true for reds, oranges, and yellows.

Basically, if your wardrobe has a decent amount of color in it, a brown pair of boots is going to match a lot more than a black pair of boots would. Grant Stone Chelsea Boot Check Best Price
If you click this link and make a purchase, we earn a commission at no additional cost to you.

Brown leather ages and patinas more visibly than black leather. You’ll be able to notice more where the indigo dye from your jeans has transferred onto the leather, or where dirt and oils have saturated the leather.

I think brown boots show their age more, which I like. Now not everyone is going to be into that sort of thing—you might want your boots to look as good as new all the time. You can certainly polish up a pair of brown boots to make them look refreshed, but black boots take shine much easier. Oak Street Trench Boot Check Best Price
If you click this link and make a purchase, we earn a commission at no additional cost to you.

Brown boots are more versatile than black boots. The biggest reason I say that is because you have a much broader color palette available to you when rocking a brown pair of boots.

But brown boots can work with a navy or charcoal suit in more formal situations, and can be dressed down more easily with a pair of jeans as well. 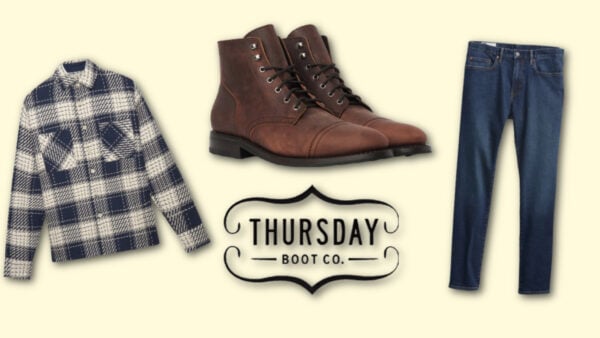 What good is a pair of boots if you don’t have the style to back them up? This guide on putting together the perfect Thursday boots outfit is going to help big.

Black boots can also go formal, but a formal pair of black boots probably won’t match well with a pair of jeans, unless you’re going for that upscale casual look. Thursday Boots Wingtip Check Best Price
If you click this link and make a purchase, we earn a commission at no additional cost to you.

3 Reasons to Get a Black Pair of Boots

1. You Wear a lot of Greyscale

If your wardrobe has a lot of black jeans and white t-shirts, then a black pair of boots might be the better option.

Honestly, I would base my answer off of this one question. If your closet is mostly white, grey, and black, then a black pair of boots is the way to go. Ace Marks Troy Chelsea Boot Check Best Price Read Our Review
If you click this link and make a purchase, we earn a commission at no additional cost to you.

2. You Need Them Polished

If you need a more formal pair of polished boots, then black leather is an excellent option. You can definitely polish a brown pair of boots, but nothing quite takes polish like black boots.

Black cream polish is the best option, and the easiest way to work up a mirror shine. I’ve seen mirror shine on brown leather, but I think black leather looks classier. 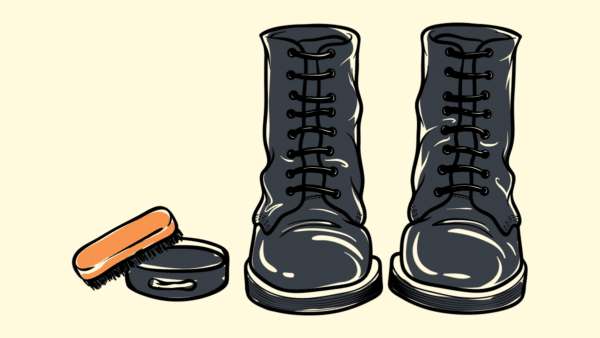 How To Polish Boots: Make Your Boots Shine in 20 Minutes

Are you looking down at an old pair of boots that could use a little love? Learn how to polish boots and get them sparkling like new with our go-to guide. Kiwi Black Parade Gloss Shoe Polish Buy Now at Amazon
If you click this link and make a purchase, we earn a commission at no additional cost to you.

Security officers often wear black boots, and I know a lot of construction guys that wear black boots because it hides the scuffs and marks better for their specific line of work.

While I normally recommend brown boots for tough labor jobs, there are certain industries where you’re in contact with tar or black paint more often, so getting a pair of black boots makes more sense in that situation. 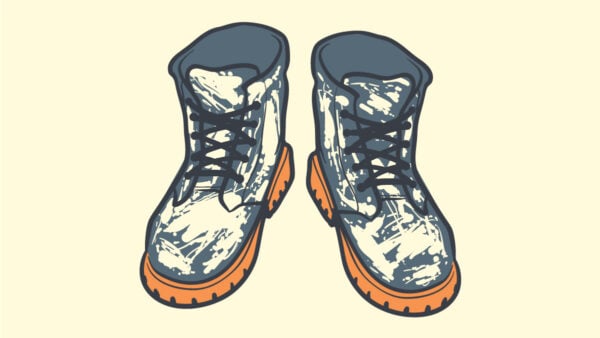 How to Get Paint Off of Leather Boots: 6 Simple Ways That Work

Paint on your boots? Don’t stress. You can get paint off leather boots and return your favorite pair to their former glory. Here’s six quick and simple ways.

Match the Style with the Color

Black boots match best with black jeans. If you want to go all the way, throw on a black t-shirt and a black leather jacket.

After a long summer here in NC, the idea of wearing all black is disturbing to me, but a lot of guys love the all black look.

You can also try other neutral colors like charcoal or navy blue. Just make sure if you go with a non-monochrome color that you tie the black back in like you see here with the black t-shirt.

Can you wear brown boots with black jeans?

Yes, you can definitely wear brown boots with black jeans. This style looks best if you’re also wearing a brown belt and a white t-shirt. Don’t add any other colors to the outfit, though—keep it simple with white, black, and brown.

When you’re styling brown boots, you’re free to mix and match about any colors you want.

As I mentioned earlier, I like olive green, tan, brown, white, and blues. But even if you gravitate more toward warmer colors like orange, red, and yellow, a brown pair of boots will look better than a pair of black boots. 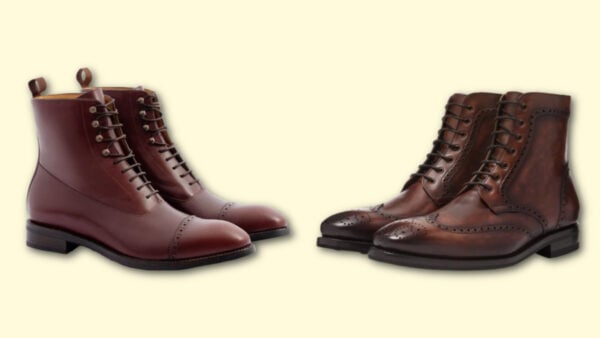 9 Best Dress Boots for Men in 2022: Stylish and Timeless

A good pair of men’s dress boots can be hard to find. Or at least, it was…Now you can find the best dress boots for men right here.

Because brown boots are generally less formal, you can also cuff the hem of your jeans to get a little variation of color and draw attention to your boots. Many readers here are divided here on whether to cuff their jeans or not, but I’m totally for it.

I think if you’ve got a great pair of boots, anything that brings them more attention is a good thing.

Best Color Brown for your First Pair of Boots

Ok, so maybe you’ve decided to get a brown pair of boots over a black pair. Good choice (it’s what I would do).

But now you have a different issue: there are so many variations on the color brown. Which should you get?

If I were getting my first pair of boots, I would choose something basic and universal like the fourth option in the image above. That’s brown Horween Chromexcel leather, which has a rich milk chocolate color.

It’s not super dark like the waxed flesh leather in the first panel, it’s not too light and orange like the second panel, and there aren’t the same red-tones you see in the oxblood color in the third panel.

A lot of guys know they’re getting multiple pairs of boots, so getting a neutral leather to start makes a lot of sense. Of course, if there’s a certain leather color that’s catching your eye, then you should just get that. 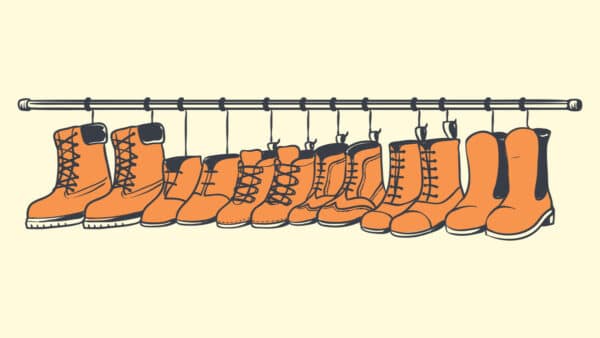 16 Types of Boots Every Guy Should Know About

Gentlemen, these are the 16 types of boots you should know about before you pick up your next pair—including at least one you may not have heard of.

While my opinion is that simple brown leather will give you the most opportunities to actually wear your boots, you may think that oxblood leather is the best color on the planet and decide to wear it every day. And that would be awesome.

Which Style Are You Going to Choose?

Personally, I’m a fan of brown boots, especially if you’re getting your first pair and want something versatile.

You may have a special reason to get black boots—I have a friend who plays in a symphony where they need to wear all black. So for him, black boots are the obvious choice. But he also bought a pair of brown boots at the same time so he could wear boots more often and with a greater variety of outfits.

If you’re completely stuck and you’re not sure which to choose, go with a standard brown pair of boots.

You can always get a second pair in any color you want. But brown leather is going to give you the most versatility. Grant Stone Diesel Check Best Price Read Our Review
If you click this link and make a purchase, we earn a commission at no additional cost to you.

What is the best color for boots?

One leather color isn’t better than another. But if you’re getting your first pair of boots, I recommend getting a classic, mid-tone brown leather. Brown leather will match with a greater variety of clothes, whereas black boots tend to only match with greyscale tones like white, black, and grey.

Is it ok to wear brown boots with black jeans? 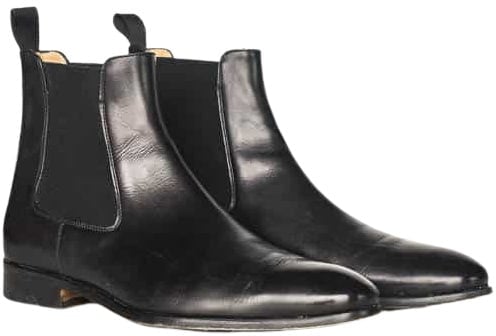 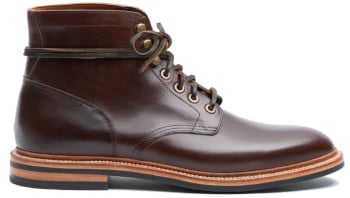 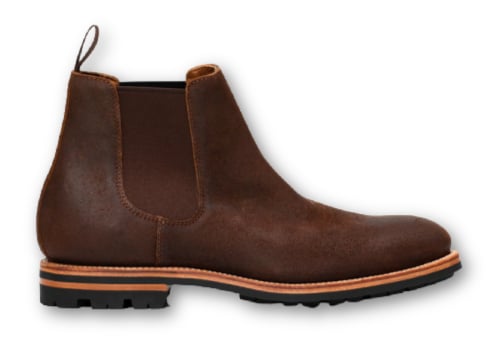 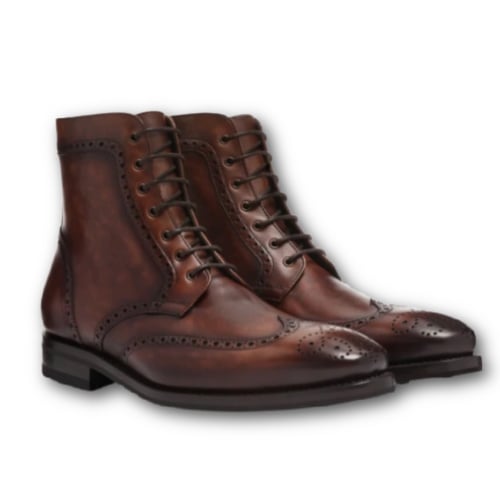